Faster smiles on OpenCV with TBB

Starting to work on OpenCV with TBB is simpler than you think. Here is a walk-through of modifying the smiledetect.cpp sample provided with OpenCV to work 30% faster. We’ll discuss the why, when and how. You’ll learn what to look out for and how to go on further.

First of all – if you don’t know what TBB is, then take a look here.

Therefore, I’m only going to assume you already have TBB installed and you know how to compile and link with it. The referenced GitHub code is using the Ubuntu libtbb-dev package.

When would you want to use TBB

OpenCV is already paralleled in many of its algorithms. Due to this fact you won’t always get much more from adding parallelism to these parts. However, usually before getting to the heavy auto-paralleled algorithms you have some tedious sequential manipulations and transformations to perform on the source image. It can be converting colors, resizing, smoothing, morphology, etc. It can be sometimes even beneficial to decouple the processing chain from the 2 small IO operations of (1) getting an image/frame from a storage and (2) presenting it on the UI.

Usually a good sign that your application can accomplish more with TBB is if it is not going as fast as you need on your target hardware, but looking at the CPU usage you see that there are more resources available to use.

When not to use TBB

Simply check the CPU resources used when your application is running. If it’s above 85%, then it’s already using the CPUs pretty good. Check other approaches, like resizing the input images, detecting on larger scales, etc.

We’ll be covering one of the most trivial but still very useful way of using TBB, the parallel pipeline. There are more complicated threading algorithms and tools which TBB provides, but they won’t always match your needs. What we cover here will match most of your daily needs.

For the purpose of demonstration I have chosen a cpp sample provided with OpenCV, called smiledetect.cpp. I encourage you to build this sample and browse through its code before we start. I’m not going to explain what this sample is doing (detecting smiles .. DUH), but simply try to make it work faster. The original file, with very small modifications, is available on my GitHub link below and is built as part of the normal build for comparing performance.

Unfortunately, on my 16 cores i7 CPUs, using a normal frame rate, this might not be the best showcase for using TBB. Here for a normal frame rate it works fast enough. Nevertheless, for the sake of argument let’s assume that this smile detection is doing an offline count of smiling faces from video files and its throughput is important.

Preparing for the use case

Assuming this is the use case, I’m going to change the code a little so we’ll have something to compare to. Most notably I’ll do this: 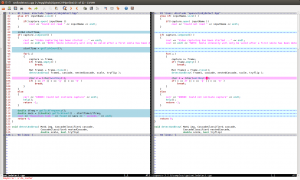 The output is still being sent to the GUI, and the UI of the original sample wasn’t changed to match this made up use case, but it’s enough for our purposes – trying to process the frames as fast as possible.

Acquiring base results to compare against

Executing the original sample code, built in Release mode, against a Release build of OpenCV:

TBB’s parallel pipeline is ideal for paralleling sequential code. It allows you to form a chain of parallel workers, moving along a payload through the pipeline in a strict order, just like in an assembly line.

We’re going to target the detectAndDraw() function of the original sample. It has several sequential steps which can be paralleled. Imagine a world in which none of these steps is waiting for the previous step. All these steps will all happen roughly at the same time.

High level flow, before we’ll look at the code: 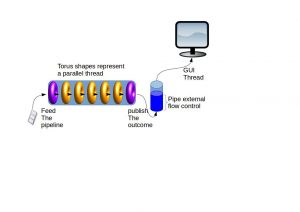 The main things to look out for here are:

The main() function (see code below)

a better loop would keep the last ProcessingChainData as long as a new one is not present and will handle UI input and output regardless of the existence of a new input from the queue.

I don’t recommend using lambda expressions for this in production. I would write properly encapsulated “processor/worker classes” which are easier to maintain.

Output of executing this code

As you can see we got ~ 30% improvement in performance.

See you next time.